Building on our shared sense of “otherness” we have worked together on 3 projects before, including drawing and full body painting, Martin’s body and surface are familiar territory. So this was less about the exploration of the terrain of the skin, and more about how his body and skin signify some of the main aspects of who he is as a person, both physically and spiritually, about his individuation.

Here my dialectic was unbalanced, with the scientific curiosity having the upper hand, leaving little room for intuitive and instinctive responses (these were given priority during the full body painting, see Aestheticisation). The purpose was to capture his body, with clinical accuracy, all the detail on his skin – as the ultimate visual scrutiny.

The method of unwrapping his skin, using the traditional cruciform cut, reflected his religious beliefs, and his interest in medieval and early renaissance religious art.

The enduring art object was created by printing onto habotai silk – chosen because it allows the inks to penetrate enabling the reverse side to have a near identical image – thus echoing the semi-transparent nature of skin, and being able to see the inside from the outside.

The structure of his body has been an issue since birth as the cerebral palsy changed the brain’s control of movement and posture, thus affecting the skeletal development. The topology map, which is the underlying structure of his surface, has been embodied and suspended to hang just behind the silk skin. The main scars incurred during his extensive periods of corrective surgery, were opened on both the skin and the underlying structure. The silk has a natural “body” and the unprinted scar covers suggest new skin growth, with all that this signifies.

The overall composition shows Martin looking slightly heaven-ward, with a gentle dreamy but content look. The hands tend towards the same direction, reaching out, and perhaps hint at supplication.

Whilst happy for the T-frame to reference the cross, I was keen that it did not dominate the reading of the piece. Instead the intention is that it might gently suggest a military or religious standard/banner as would be carried at the front of a parade, and then installed on the inside of a cathedral. This would concur with some of the ways Martin sees himself (as the Spartan king Agesilaos II and St. Vitalis of Savigny). Thus the method of hanging the frame, leaning forward slightly, and off the floor, to suggest it is mobile.

The suggestion that a disabled gay man could be the “Standard” rails against the normative standards of the military and church, and wider society.

The references to canvas, stretchers and coming away from the wall are clear.

The end result is that Martin is put up for display, in clear detail for the viewer to inspect, without coquettishness. The choice of materials enable a tactile involvement – people instinctively touch the silk, and also sensitively touch the topology map behind. 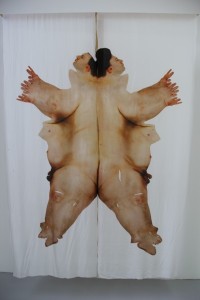 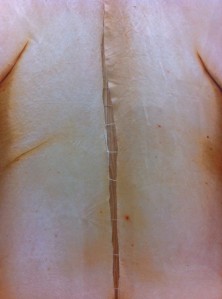 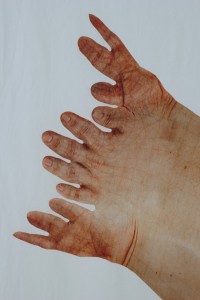 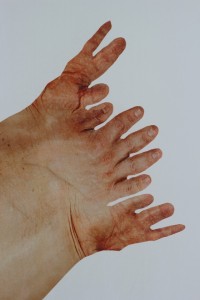 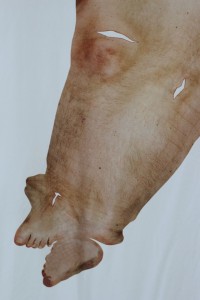