Jonathan Armour led this session of the Unit.

Sarah Kent’s suggestion that “acceptance of the bodies we inhabit rather than the pursuit of the perfect physique”, is perhaps a part of where we are today, but certainly not a complete answer. It is also stated from a general hetero-norm perspective, as opposed to our particular viewpoint/gaze.

That is perhaps a thread running through her words. We are reminded of the exclusion caused by the normative selection of what constitutes art, and what is shown in galleries and museums from the Renaissance onwards. It was broadly based on the gaze of the male heterosexual, but implicit in it was the additional characteristics of being western-cultured, christian-valued, white, and more recently an acknowledgment that such a gaze also excluded those who were not able bodied or minded. Particularly relevant this evening as our model, Martin, has  disability resulting from cerebral palsy.

Everyone else was considered “other”. (many references for this).

Through the later decades of the 20th century, feminists, racial activists, queer activists have tried to redress some of this exclusion.

OK, park this on the side for the moment…

Here we are undertaking an intensive enquiry of the male body. To look at something anew, with actual close scrutiny, we must disrupt or unlearn our previous skills/methods/ways of seeing. So to try a couple of ways of achieving that which may force us to really concentrate anew on how to draw and on what we are drawing. By disrupting the well trained comms-path of subject, eye, brain, muscular control in the arm and hand, pencil, paper, mark, and feedback loop.

So to try to “normalise” the room, in a perverse way. To put us all, artists and model, on a (slightly more) level playing field, to queer the pitch.

For the first hour, we draw with our “other” hand. 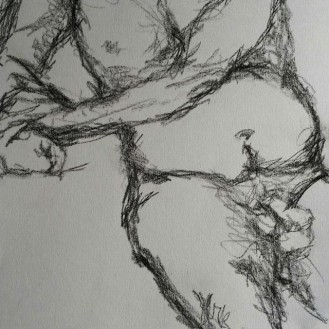 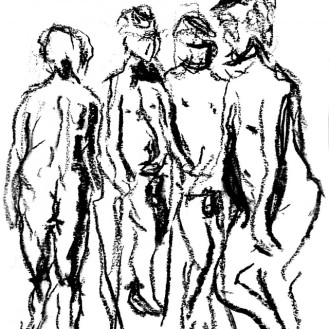 For the second hour, we draw with our “other” hand and also with one eye covered – to disrupt our ability to judge distance and depth. 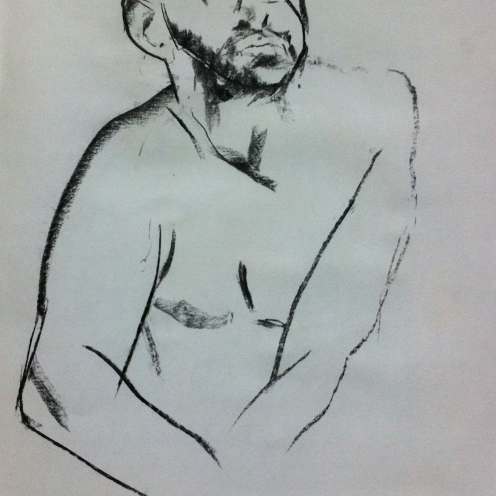 The third hour is free-form.